Spreading therapy over time may be more beneficial than consecutively 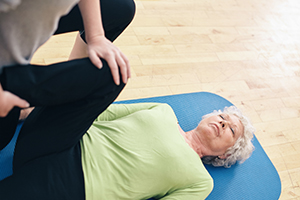 Osteoarthritis (OA) is a common disorder in which protective cartilage surrounding joints gradually wears away. The condition is most prevalent in adults over 65 years old, and most commonly affects the knee and hip. Manual therapy is a treatment in which a physical therapist performs manipulations and mobilizations with their hands, and it is commonly combined with exercise therapy to treat knee OA. Unfortunately, it's not clear if using manual therapy adds any benefits to those from exercise, and strategies are needed to help ensure patients maintain the benefits of therapy in the long-term. One suggestion is to include "booster sessions," in which patients receive physical therapy every few months after their initial sessions to increase its effectiveness. More research is needed on booster sessions, so a powerful study called a randomized-controlled trial (RCT) was conducted to compare the effects of manual therapy, booster sessions, and exercise therapy for patients with knee OA.

Participants randomly assigned to one of four groups

Manual therapy or booster sessions may add benefit, but not in combination

-As reported in the September'15 issue of JOSPT