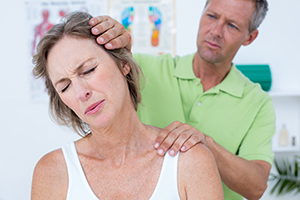 This specific combination of treatments has not yet been studied

Neck pain is a major problem that regularly affects millions of Americans. It's estimated that between 30-50% of the population experiences neck pain each year, and about 11% of people are limited by it when performing daily activities. Although most cases of neck pain improve on their own within a reasonable amount of time, for some individuals it becomes a long-term problem. When pain lasts for more than three months, it's called chronic neck pain, and it can lead to additional problems like stress, anxiety, reduced quality of life and a tendency to avoid certain behaviors. There are many treatments available for chronic neck pain, but it's generally accepted that physical therapy and some other treatments are effective for reducing pain and improving function in patients. In particular, doing specific exercises for the neck, increasing physical activity levels and educating patients on their pain and how to cope with it have all been supported by literature as beneficial treatments for patients with chronic neck pain. Despite the fact that all of these treatments are known to be effective, the result of them being using in combination has not been studied. Therefore, a study called a randomized-controlled trial (RCT) was conducted, which is the most powerful type of individual study that can be performed.

Individuals with chronic neck pain for at least six months were recruited for the RCT and screened to determine if they were eligible to participate. Of the individuals screened, 200 were accepted and randomly assigned to either the exercise group or the control group. Participants in both groups attended four education sessions, which lasted for 1.5 hours and took place once a month. The sessions focused on explaining ways that patients could understand and accept their pain, and on how to set goals to work towards. In addition to this, the exercise group also received eight 30-minute sessions, which consisted of instructions for specific neck exercises and a physical activity program. The neck exercises were customized to each patient and were to be performed twice a day for four months. The physical activity program was performed three times a week for four months and consisted of either walking or cycling, and increasing the intensity over this span of time. All participants were evaluated before and immediately after the study for a variety of both physical and mental outcomes related to their chronic neck pain.

Patients who perform exercises and physical activity improve much more

After four months, patients in the exercise group reported significantly better scores than the control group in most/many of the outcomes that were measured. In particular, they were found to have better muscle function, neck flexibility, and pain threshold, as well as improved mood and both mental and physical quality of life. In addition, the participants in the exercise group adhered to their program slightly more than the control group, which may have increased the effect of the treatment even more in their favor. Based on these findings, it appears that a treatment program that combines education, specific neck exercises, and a physical training program is rather beneficial for chronic neck pain patients and can lead to a variety of improvements. Patients who have been plagued by neck pain for a long while should, therefore, seek out the services of physical therapists that provide these types of treatments in order to achieve notable benefits.

-As reported in the August '16 issue of Manual Therapy